Reports are out claiming that Sami Khedira’s agent has revealed that Real Madrid have received no bids for the Germany international midfielder. 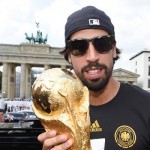 Khedira has been strongly linked with a summer move to Arsenal, with some reports in Spain suggesting the Gunners had struck a deal with the Champions League winners.

But Sky Sports News understands those reports are wide of the mark and the player’s agent, Jorg Neubauer, insists that Real have received no bid from any club.

Khedira has one year left on his contract at the Bernabeu, and Neubauer says talks are continuing with the club about a potential new deal.