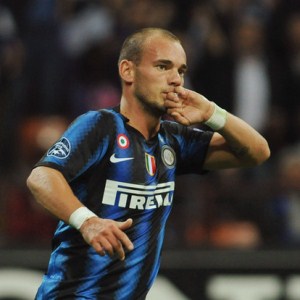 The agent of Wesley Sneijder has cast new doubt on his future with Italian champions Inter Milan.

The Dutch international midfielder has reportedly attracted interest from Europe’s top clubs and admitted last week that Manchester United was not out of the question in future.

“There was talk of a rich improvement to Wesley’s contract and especially of an important role for him within the squad,” agent Soren Lerby told FCInterNews1908.

“He was promised high wages and a super rescission clause, but Inter did not keep their word.”