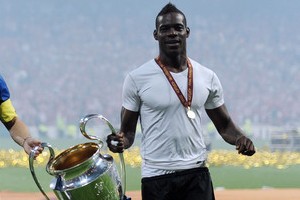 Sensational news are out and it has been reported that the agent of Mario Balotelli has revealed that a move to Real Madrid could be on for the problematic Inter Milan striker.

However the player’s agent, Mino Raiola insists that it will only take crazy money to land the Italy U21 striker.

The agent told Il Corriere dello Sport that : “Mario will stay at Inter. We have not received offers from any team, and Inter have not said he is for sale, therefore he will stay where he is,”.

But, when prompted, the sound of money brought him to his feet.

Raiola added: “And who knows, by the end of the transfer market Jose Mourinho could ask Florentino Perez to invest €70 million in Mario.

“The market is open until August 30, and so anything can happen.”