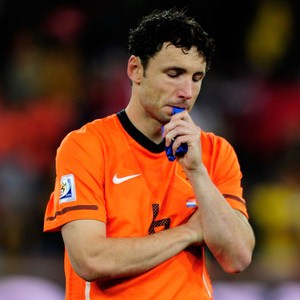 The agent of Bayern Munich midfielder Mark van Bommel has cooled talk of a move to AC Milan.

The 33 year old Dutch international’s current contract with the German giants ends this summer and reports in Italy claim Milan are keen to acquire the services of the 33-year-old.

“It’s true that this week I will be in Milan but to discuss other matters,” said Van Bommel’s agent Mino Raiola to calciomercato.it.

“I have had no contact with Milan. I have not yet spoken to Van Bommel either and it’s too early to discuss an eventual contract renewal.

“These are matters we will discuss later on in the season.” Thiago Silva : Clarence Seedorf Can Be The Coach Of AC Milan!