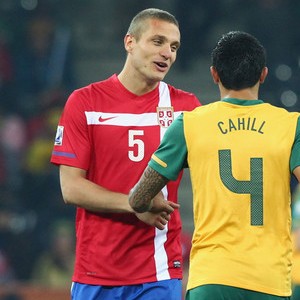 Nemanja Vidic’s agent has revealed that Real Madrid have not made an approach for the Manchester United defender.

Silvano Martino has confirmed that the Spanish giants have made no official enquiry for the Serbian international but did not rule out a move if something happened to eventuate.

“Real Madrid? So far the Spanish club has not contacted us,” Martino told Itasportpress.it.

“The player is on holiday in Mallorca and he is thinking about next season with Manchester United.

“It is difficult for him to leave England even if with the market open anything can happen.”

Despite Martino’s comments, United are reportedly set to offer Vidic a new deal worth £90,000 a week to beat off any competition from the if the Spaniards did happen to make a bid.