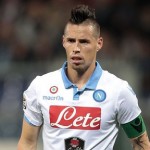 Reports have emerged claiming that the agent of Marek Hamsik is sounding out English clubs about the unsettled Napoli midfielder.

The Daily Express revealed that reports in Italy suggest that the Slovakian international will be allowed to leave for £20m in January or as little as £12m in the summer.

And Juraj Venglos – who represents the 27-year-old – is currently doing the rounds of some of the Premier League’s biggest clubs to ascertain their level of interest.

Manchester United, Chelsea and Arsenal have all been linked with Hamsik.