It has been reported that the agent of Lorenzo Insigne has denied claims that Arsenal have made a £20m move to sign the Italian winger. 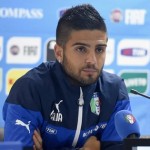 “We have not been contacted by Arsenal for Lorenzo Insigne and Napoli has not notified us of this interest,” Insigne’s agent Fabio Andreotti said to Italian radio station Radio Crc.

“Lorenzo is a target of several European sides so it wouldn’t surprise me if big clubs are interested in him.

“However, Napoli don’t want to put him in the market.”