Interesting transfer news are out claiming that Liverpool are rivaling Arsenal for Toulouse fullback Serge Aurier. 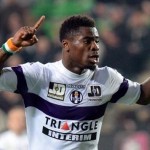 The Ivory Coast international star is leaving Toulouse this summer and is on YouTube actively talking up the prospect of joining Arsenal.

However, the Daily Star says Liverpool have emerged as unlikely contenders to sign him.

Aurier’s agent Stephane Courbis said: “There is no agreement with Arsenal.

“We’ve talked in past but there has been nothing recently. We’re in talks with another English side.”

Boyhood Arsenal fan Aurier, 21, is valued at around £7m. The FA To Open Talks With Arsenal Legend Dennis Bergkamp