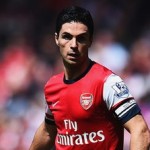 It has been reported that the agent of Arsenal midfielder Mikel Arteta has dismissed Athletic Bilbao rumours.

The former Everton midfielder has been linked with Bilbao as a replacement for new Manchester United signing Ander Herrera.

But Inaki Ibanez told El Mundo Deportivo: “This is totally false. Mikel has no interest in leaving Arsenal.”