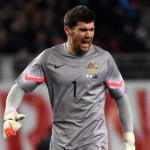 Reports are out claiming that Liverpool’s interest in Club Brugge goalkeeper Mat Ryan is being played down.

While Ryan’s representative Mikkel Beck has admitted that a January transfer is “unlikely”, he has revealed that the Club Brugge goalkeeper is keen on a move to the Premier League.

“I have read the reports that Liverpool are watching Mat, but I am unaware of concrete interest from them,” Beck told the Liverpool Echo.

“We just re-signed a new contract at Brugge and Mat is very happy there.

“A move is unlikely this month as Mat is away at the Asian Cup and is fully focused on doing well for Australia.

“Playing in the Premier League would be of interest to Mat as it is one of the best leagues in the world and knowing how ambitious Mat is it is the kind of league he would like to play in.”