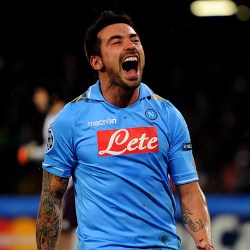 The agent of Napoli striker Ezequiel Lavezzi is remaining calm despite the fact his client is being linked with Manchester City.

The 26-year old was reportedly watched by the English league leaders as he netted a match-winning double as Napoli defeated Chelsea 3-1 in the Champions League on Tuesday night but Lavezzi’s representative, Alejandro Mazzoni, says there has been no contact from the Eastlands outfit.

“It makes no sense to talk about the market, today we all have to enjoy Napoli’s success and stay quiet,” he told Radio Crc.

“Lavezzi is fine in Napoli and has a good relationship with both club and team-mates.

“I was told that Manchester City’s observers were at San Paolo during the Champions League match, but this does not mean anything. I’ve not even seen them.”