Reports are out claiming that the agent of Shakhtar Donetsk wing-back Darijo Srna has cooled reports linking him with Manchester United. 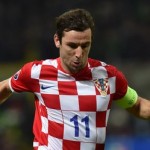 The Croatia captain was linked with United last week.

But Damir Stimac insisted: “This Manchester United story is only one of many. During the summer we had specific questions, however Srna didn’t show enough interest to change club, not even to go on loan.

“He said that his loyalty to Shakhtar is more important than flashy names of possible new employers. And right now, when things are hardest, he must remain.” Man Utd, Real Madrid To Do Battle For Wolfsburg Fullback