It has been reported that the agent of Arsenal attacker Lukas Podolski has cooled talk of a move to Serie A. 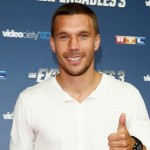 The German international star is being linked with a switch to Serie A this week.

“I read in the newspapers that Juventus and Napoli were interested in Lukas,” Ali Pektas told TuttoMercatoWeb.

“But there has been no contact from either of those clubs.

“I don’t know if he will go to Italy in this window. I can’t say anything for sure.

“What I can say however, is that Lukas has a contract with Arsenal.”