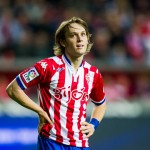 Reports have emerged claiming that the agent of Barcelona midfielder Alen Halilovic has cooled talk of a move to the Premier League.

The Croatian is currently on-loan at Sporting Gijon.

“If Barcelona choose to loan him again, we prefer Halilovic to stay in Spain. For him, La Liga is better than the Premier League,” stated Zoran Stojadinovic, Halilovic’s agent.

“Due to his situation, evolution and contribution [Barcelona Sporting Director Roberto Fernandez] thinks that the loan has been positive.

“It’s not a good time to discuss contracts with Barcelona right now, they are thinking of La Liga. We will finish the season and then we’ll talk with the club.”

Guardiola Confident Valdes Will Be Back Sooner Than Expected