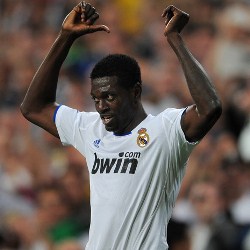 The agent of Emmanuel Adebayor has revealed that the Manchester City striker is not short of offers.

Adebayor’s agent, Phil Smith, reportedly told talkSPORT that Adebayor is a player that will appeal to a lot of managers in the Premier League.

He said: “At the time he was brought as a direct replacement for Samuel Eto’o who didn’t come [to Manchester City]. It was their development phase and most clubs move quite slowly in developing like that but City have, well it’s there for all to see.

“He’s almost a victim in that respect of them developing a bit faster and quicker than some other clubs.

“He’s got a reputation for being able to play in Europe, he’s gone on to play for one of the biggest clubs in the world. I’m not sure if he is going to go back to Real Madrid but he is certainly in demand but he’s earning a lot of money.

“He will appeal to various managers, it’s a difficult deal to put together but the onus will certainly be on Manchester City to some degree.

“It’s a difficult equation to make and the player will have some decisions to make as well.”