It has been reported that the agent of AC Milan striker Mario Balotelli regrets taking him away from Manchester City. 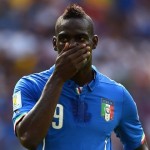 It is reported that the 23 year old is being pilloried in the Italian press after the Azzurri’s dismal World Cup campaign.

The striker is being linked with a return to England at Arsenal and agent Mino Raiola conceded: “It irritated me to see all the blame dumped on to a 23-year-old. It annoyed me and I don’t think this would’ve happened anywhere else in the world.

“I made a mistake in bringing Mario back to Italy.”