Reports are out claiming that the agent of Napoli midfielder Jorginho is coy over talk of interest from Arsenal. 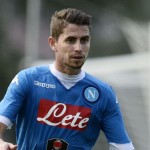 Arsenal were scouting Jorginho in action against Genoa on the weekend.

“I don’t know if the Arsenal scouts were in Genoa for Jorginho,” Joao Santos admitted, speaking to Radio Crc.

“I’m not surprised that the player is doing very well – especially in light of the change of Coach [Maurizio Sarri replacing Rafa Benitez] – and has top clubs interested in him.

“One of the head scouts of Arsenal is well-known, and so I know he was at Marassi for the Napoli match. Right now we’re more thinking about Jorginho at Napoli than the transfer market.

“I’m in Brazil, and when I’m back we can discuss my client’s contract. The priority is getting a call-up for the [Italy] national team, then there’s the January transfer market.

“If Napoli receive an irrefutable offer for Jorginho in January then it’s normal that we’d make our assessments.”