It has been reported that the agent of CSKA Moscow striker Seydou Doumbia has confirmed major interest from England. 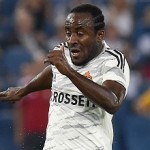 The 26 year old is in new contract talks with CSKA, but he is also emerging as a top January target for Tottenham, Liverpool and Arsenal.

“We are talking with CSKA about the renewal of the contract, but he does not lack interest,” revealed Bernard Beytrison.

“There is a lot of interest from England, Spain, Germany and Italy.

“He’s a cannon and there are not many around like him.

“But now he is under contract with CSKA and you (clubs) have to satisfy them to talk to the player.”