It has been reported that the agent of Gareth Bale has shot down talk of the Real Madrid star moving to Manchester United. 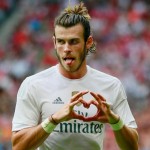 The Wales international star has been the subject of bids from Manchester United as the Premier League giants look to bring the 26-year-old winger back to England, but speaking about the situation with the Old Trafford club, Barnett was very clear in saying Bale would stay at the Bernabeu.

“There is no situation,” he told International Business Times.

“Why should he leave? There are rumours of men on the moon. That’s a saying.

“He is a star at Real. Why would he consider leaving them? He is very happy to be at the biggest club in the world.” Paul Scholes Ready To Return and Save Man Utd