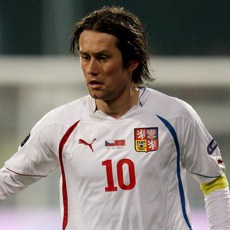 The agent Tomas Rosicky has confirmed that the midfielder will not be departing Arsenal this winter.

Paska has revealed that Rosicky, whose contract expires in the summer, will not be leaving the Emirates Stadium in January but his future will be sorted by mid-February.

“It was a good discussion, like it always is with Mr Wenger,” Paska told Czech news agency CTK.

“We have outlined our ideas and Arsenal their ideas. We have exchanged some pieces of information and agreed on making the final decision on 15th February.

“Everything is wide open. Naturally, I have talked with Tomas and know his wishes, but until the next talks with Arsenal we will not reveal our cards.

“I would not like to speculate (on Rosicky’s future) but people at Arsenal have hinted that they would be interested in Tomas carrying on there.

“But we will have to wait and see till the middle of February how things unfold.”