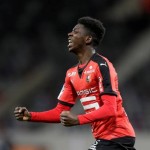 Reports are out claiming that the agent of Rennes striker Ousmane Dembele is angry about the transfer speculation swirling around him.

Dembele has been linked with Arsenal, Tottenham, Liverpool, Barcelona and Bayern Munich just this week.

But Badou Sambague said: “When I read that, I said to myself ‘this is a joke’.

“To also tell me that Barca had signed Ousmane and I may not be aware of the fake document’s existence shocked me.”

He continued: “I’m also disappointed because I get the impression that people are trying to destabilize the guy. But then he is very stable and very intelligent … the goal is to ignore everything that is said in the press.”