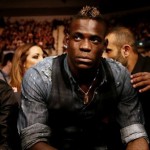 The Italian international striker has been linked with Napoli for the January market.

But Canovi told TMW: “Balotelli to Napoli? Balotelli earns a lot. It can be a task for the summer and not in January.

“But I’d tell Napoli to invest in other players rather than Balotelli.”

He added: “Today I believe that Napoli will fight to finish third. I still think that the Napoli need a playmaker, one who knows how to handle the ball in moments of difficulty and set up the game.”