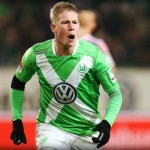 Reports are out claiming that the agent of Kevin de Bruyne is convinced his market price has more than doubled since his move to VfL Wolfsburg.

Bayern Munich, Manchester United and Manchester City are being linked with the exciting Belgian winger.

But Patrick De Koster told BILD: “A club that today says it will pay thirty million for Kevin is not dealing in reality.

Bayern have been linked with a €50 million bid for the former Chelsea star this week. Mario Balotelli : I Will Give My Best At Manchester City!