It has been reported that Aiden McGeady is urging Everton to focus all their attentions on pushing for a spot in Europe. 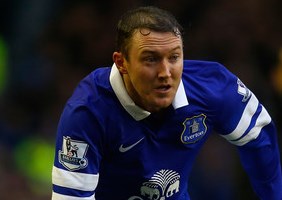 The Toffees currently sit seventh on the Premier League table but with 11 fixtures remaining in the 2013/14 campaign, the Irish winger is backing the Merseyside outfit to make a late charge for the top four.

Everton are nine points behind fourth-placed Manchester City, making it a fairly difficult task, but McGeady is daring to dream.

The 27 year old told Sky Sports : “I think it’s always been the target, but you know maybe four or five games ago we would have said it was more realistic,”.

“A couple of results haven’t went our way recently, Chelsea away, Tottenham away, but I think we’ve got a game in hand on Spurs and we’re only a few points behind so if we can finish as high up the table as possible, that’s the main aim.

“Whatever else comes will be a bonus.”

Everton were eliminated from the FA Cup at the quarter-final stages by Arsenal 4-1 on the weekend and will be now looking to bounce back in the league when they host third-bottom Cardiff City this Saturday.

Steven Pienaar On The Verge Of Joining Tottenham