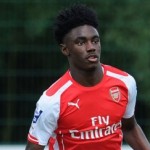 Ainsley Maitland-Niles and Stefan O’Connor have turned pro with Arsenal.

The pair, both 17, helped the Gunners’ under-18s to the last four of the FA Youth Cup last season, as well as being mainstays of the under-19s side that reached the UEFA Youth League quarter-finals in 2013/14.