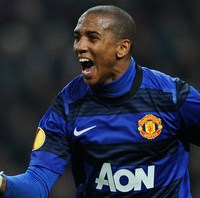 Ashley Young’s first Manchester United goal since September set the Red Devils on their way to a comfortable win over over Ajax in Amsterdam tonight.

The last time Young found the net was a last-gasp face-saver against Basel at Old Trafford, in a match which Sir Alex Ferguson still looks back on as the draw that cost his team their place in the Champions League.

And, after a poor first-half, the visitors roused themselves after the break and Young’s 58th-minute winner came at the end of their most threatening spell, the England man tucking home after Nani’s cross had been deflected into his path.

Javier Hernandez added a second six minutes from time to secure a result that will allow Ferguson to take a pragmatic approach to next week’s second leg, which, unlike tonight, will be followed four days later by a crucial Premier League game, against high flying Norwich at Carrow Road.

As Tom Cleverley was handed his European debut after playing just twice since the beginning of September and not at all for over three months, Nani and Phil Jones back after four match absences and Ashley Young only just returned from a pre-Christmas injury, it was perhaps no surprise United were so far off the pace.