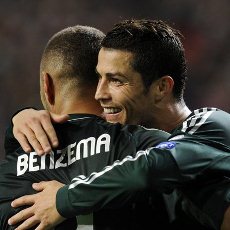 Real Madrid made it two wins from two in Group D as a Cristiano Ronaldo hat-trick guided them to a comfortable 4-1 win away at Ajax.

The Spanish champions had been frustrated by Ajax goalkeeper Kenneth Vermeer for most of the first half but finally made the breakthrough just before half-time when Ronaldo tapped in from Karim Benzema’s cross.

Benzema then made it two after the interval with a stunning bicycle kick from Kaka’s cross but Niklas Moisander briefly gave the Dutch champions hope when he headed in to reduce the arrears eight minutes later.

However, that hope was extinguished with 11 minutes remaining when Ronaldo smashed home the visitors’ third from outside the area, before completing the rout with a lovely chip over Vermeer soon after.