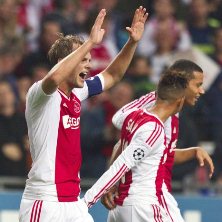 Manchester City were left facing a huge task to revive their Champions League campaign after crashing to defeat at Ajax.

Samir Nasri put them on course for victory in their vital Group D game in Amsterdam but it came much against the run of play.

Ajax responded emphatically to get their first win of the competition – and leave City still looking for theirs – with goals from Siem de Jong, Niklas Moisander and, with the aid of a deflection, Christian Eriksen.

The defeat left the Barclays Premier League champions bottom of the group and staring at the possibility of failing to reach the knockout phase for a second successive season.

Ajax were supposedly the group’s weakest link but they looked anything but in a game which, although City had their moments, the hosts dominated.