Reports are out claiming that Ajax coach Frank de Boer is being linked with Arsenal. 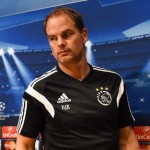 De Boer, along with entourage Denis Bergkamp and Marc Overmars are seen by some close to the Arsenal hierarchy as a potential ‘dream team’ to take over at the club.

The Dutchman has also been linked with Newcastle United.