It has been reported that Arsenal striker Yaya Sanogo could cut short his loan at Ajax. 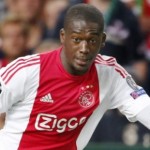 According to reports in Holland, the Arsenal man could soon find himself out of the line-up and back in north London.

Voetbal Nieuws says Ajax are on the lookout for a new frontman, with Sanogo given a November deadline to sort his form out.

The Gunners loanee has been given three substitute appearances so far after failing to impress boss Frank de Boer in training.