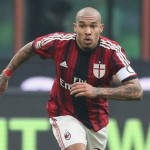 Reports are out claiming that Ajax have made a move for AC Milan midfielder Nigel de Jong.

De Jong is off contract at the end of the season and he is free to commit to a pre-contract with foreign clubs.

His situation has alerted Manchester United, though it’s Ajax which have stepped in this week.

De Telegraaf says Ajax have tabled a pre-contract offer to De Jong, which was immediately rejected.

At this stage in his career, the former Manchester City midfielder isn’t seeking a return to the Eredivisie.