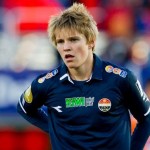 Reports are out claiming that Ajax are closing on a deal for Stromsgodset midfielder Martin Odegaard.

The Daily Star Sunday says the 16-year-old trained with Manchester United and Liverpool last month and was given a tour of Manchester City’s new £200-million training complex. He was also a target for Southampton.

But Dutch giants Ajax look set to beat off the Premier League’s big-hitters with the promise of a fast-track to first-team stardom.

Ajax’s youth system is renowned the world over and guarantees a quickfire progression into senior football.

Odegaard and his father believe a move to a top flight club in England could hinder his progress.

The news follows yesterday’s revelation that Ajax have beaten Arsenal to the pre-contract signing of Barcelona goalkeeper Andrey Onana.