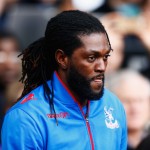 “Players of that size, power and pace can terrorise defences,” said Pardew, who will be unable to call upon the injured Dwight Gayle this weekend.

“That’s what we want Connor and Ade to do for us. Connor’s had some terrific games for us but just not enough of them.

“We’ve really missed his presence at times. We took Adebayor in the last window because we were struggling to get Connor on the pitch.

“And Ade played well against Everton when he came on, so now Connor’s got competition, he’s got to stay fit.”