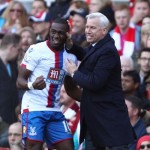 It has been revealed that Alan Pardew felt his Crystal Palace side could have beaten Arsenal at the Emirates Stadium on Sunday.

Yannick Bolasie’s 81st-minute effort from distance cancelled out Alexis Sanchez’s first-half headed opener in North London before the visiting Eagles had the opportunity to win it when Wilfried Zaha lost possession rather than lay it off for Emmanuel Adebayor.

After the match, Pardew was of the belief that Palace could have nicked all three points at the end having forced the issue against a very beatable Arsenal outfit.

“If he (Zaha) has one better touch there, he’s got Ade in the middle to finish the game off,” Pardew said.

“I’ve seen games at the Emirates where you can exploit that last period of the game, if you’re in the game.

“I genuinely felt after the equaliser that it might be us that won it.

“They over commit at times. I admire that. That’s not a deficiency in their game plan or their manager, but an opportunity for you (the opposition).”