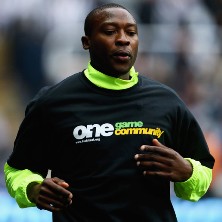 It has been revealed that Newcastle United boss Alan Pardew remains hopeful of keeping hold of Shola Ameobi.

The 31 year old is in line to join Nigeria for the African Nations Cup.

Pardew said: “It’s something we are trying to clear up with the authorities there, and I don’t really want to say anymore than that.

“We seem to have two different messages coming out. We should hopefully clear that up over the next couple of days and have a more definitive answer for the media before the start of next week.”

The nightmare scenario for Pardew would see both Demba Ba leaving and Ameobi rendered unavailable, leaving him with just a single striker, although he does not expect that to happen.

He said: “No, I don’t think that will happen. We have obviously got a scenario where we have got to protect ourselves.”

Newcastle United Not Interested In Selling Yohan Cabaye To Arsenal