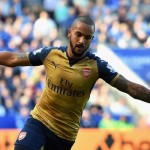 The Gunners host the Premier League-leading Red Devils at the Emirates Stadium on Sunday on the back of a disappointing 3-2 loss to Olympiakos in the Champions League on Tuesday.

“At the other end, Manchester United have obviously defended really well more often than not but I don’t think they’ve got the best back four in the world by any stretch,” he told Sky Sports.

“They’ll be scared by the likes of Theo Walcott if he’s supplied with the ammunition, with the passes.

“I would imagine they would defend fairly deep and make it difficult for Arsenal to get in behind but it’s going to be a fascinating clash.”