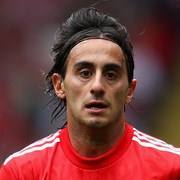 Interesting transfer news are out and it has been revealed that AC Milan hope to complete the signing of Liverpool midfielder Alberto Aquilani today.

The Italian international midfielder will join Milan on a 12-month loan with a clause to sign him permanently for €6 million once he completes 25 games.

It is said that the payment would be spread out at €2m per year starting from 2012.

The former AS Roma star would be handed a contract worth €2.5m per season and could make his debut on Saturday in the Serie A opener against Cagliari. Ibrahimovic : I Am Very Happy To Play With Robinho