It has been reported that Argentina coach Alejandro Sabella was proud of his team after their World Cup final defeat to Germany. 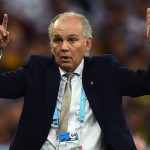 The 59 year old said he would be stepping down regardless of the result in Rio de Janeiro and saw his side lose the Final 1-0 in extra time to Germany.

“I feel sad at not being able to win the tournament but I’m very proud of the team, who played a great match,” said Sabella.

“I congratulate the players, who made their country proud for the effort they put in to the championship.

“I think the people will recognise that. Results are always secondary. The team grew today and made a great game against a great football superpower.

“We were overcome during extra time, but we had chances. I also congratulate Germany on winning the trophy.

“These are very close matches and when you make a mistake, it’s difficult to turn it around. I’m proud of these players and it’s clear they gave their all for the Argentina jersey.”