Reports are out claiming that Manchester United are keeping tabs on Dynamo Kyiv defender Aleksandar Dragovic. 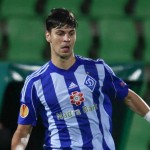 Reports emerged over the weekend that United had made an offer for the Austria international.

The Manchester Evening News says United have been closely tracking Dragovic’s progress but are yet to be convinced of his suitability for a Premier League move.

He joined Dynamo Kyiv from FC Basel in July 2013.

The defender’s agents feel that a summer swoop is more likely – if indeed United follow up on their interest at all.