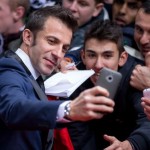 It has been reported that Juventus legend Alessandro del Piero believes they can win the Champions League.

Juve meet Barcelona in the final next month.

“Juventus defeated the defending champions, Real Madrid, and showed they are a team that is very compact and very solid.

“They know how to defend and how to score goals. In a single-game final, the motivational aspect will be very important.” Barcelona to offer Alexis Sanchez plus cash for Kompany