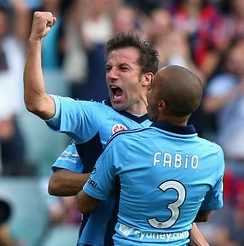 Alessandro Del Piero has opened his goalscoring account in the A-League for Sydney FC.

Former Juventus great Del Piero levelled for Sydney FC with a sublime curling free-kick in the 26th minute to cancel out Ryan Griffiths’ opener for Newcastle Jets in the eventual 3-2 win for the latter at the Allianz Stadium in Sydney.

35,419 fans came out to see the Italian maestro and he didn’t disappoint by netting his first A-League goal in fine fashion.