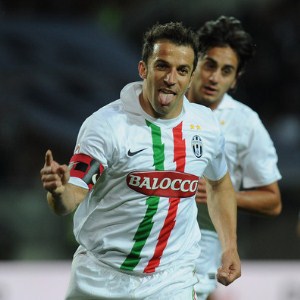 Alessandro Del Piero has revealed that watching NBA outfit LA Lakers may help in getting him to MLS.

The 36-year old Italian World Cup winner has previously been linked with a move to the USA but his most recent comments indicate that perhaps Los Angeles, alongside David Beckham and Landon Donovan, could be the place he ends his playing career.

The Juventus striker told Sky Sport Italia : “I think I can play on,”.

“In America? That could be a possibility. It’s a country that I do like.

Del Piero is still in decent form in Italy’s Serie A despite his ageing years and this season has scored eight goals for the Old Lady of Turin who sit down in seventh on the league table.

The veteran striker has played a total of 489 games for Juventus scoring a total of 205 goals along the way.