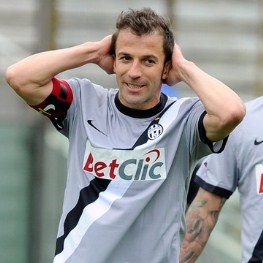 Alessandro del Piero cannot guarantee playing beyond the end of this season.

The club captain is on a one-season deal at Juve and turns 37 in November.

“It’s not a recurring thought,” he told the Gazzetta dello Sport when questioned on possible retirement.

“Yet knowing that this could be my last season is pushing me to give 200 per cent.

“I’ve still not decided whether this will be my final campaign at Juventus or overall. But, in 20 years, I’ll be happy to look back on this adventure.”

The former Italian international star has won every major honour with the club, but success has been hard to come by since Calciopoli demotion in 2006.

“We need to be more united than ever to get good results,” continued the 2006 World Cup winner.

“To achieve great results you need humility, honour, responsibility and the spirit of sacrifice.”