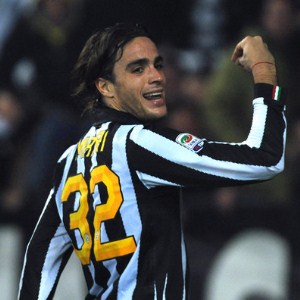 Alessandro Matri has revealed that he has no regrets over his move to Juventus.

The Cagliari striker has seen Juve’s hit a form slump since his arrival in January.

“I have absolutely no regrets about joining Juventus rather than Milan,” insisted Matri ahead of Saturday night’s showdown with AC Milan.

“I spent 12 years with the Rossoneri jersey and at first it did make me feel rather strange playing against them, but not any more. If I should score tomorrow, I would definitely celebrate.

He added : “I know Massimiliano Allegri well from our time at Cagliari, but he never asked me to join him at Milan.

“At the moment I think the best strikers in the world are Zlatan Ibrahimovic and Samuel Eto’o, but my idol remains Marco Van Basten. As for the current squad, I really fear Kevin-Prince Boateng.”