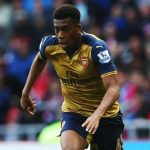 Reports are out claiming that Alex Iwobi admits he came close to being released by Arsenal.

The 20-year-old progressed through the Gunners’ academy to make a huge impact when he broke into Arsene Wenger’s first team towards the end of last season, scoring twice in 13 league appearances.

Iwobi told Arsenal Magazine: “Well I was on trial at six, and I think I was eight when I signed.

“I nearly got released when I was 13 or 14, so back then I really didn’t think I would make it here.

“There was a stage when I wasn’t playing up above my age group, but all the better players were.

“I questioned myself a lot at that age about whether I was good enough, but I eventually got through it.

“They did keep me on and I guess since then that’s when I really kicked on.

“I played in the Nike Cup (youth tournament) shortly after that, and then England called me up and things started moving.”