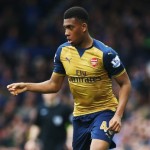 Reports are out claiming that Arsenal youngster Alex Iwobi is keen on consolidating on his breakthrough season at the Emirates Stadium.

Iwobi scored his first ever senior goal during Arsenal’s 2-0 victory over Everton last weekend and the attacking midfielder is already showing signs that he can become a regular for the first team before too long.

The teenager has been left very satisfied by how his breakthrough season has panned out and has now stated that he is intent on building on the platform that has been created this term.

Speaking to the Arsenal Weekly podcast, the two-time Nigerian international said: “I thought that I was going to go on loan after the Emirates Cup and have to prove myself in men’s football out on loan. I stayed, the boss had faith in me, I played a few matches and here we are.

“The first-team players have told me that I’ve deserved to make the step up, that it comes with hard work. They advise me with a few things but most of the time they’re trying to keep me cool, relaxed and level-headed. I’m just focused on playing as much football as I can for the rest of the season.”

Wojciech Szczesny Delighted With The Return Of Mathieu Flamini