Reports are out claiming that Arsenal are set to reward Alex Iwobi for becoming a first-team regular. 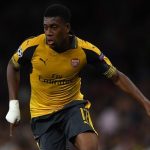 The Daily Mirror is reporting that the Gunners could soon offer the 20-year-old forward a new and improved deal, despite the fact he only signed a £25,000-a-week contract in April.

Iwobi has started four of the seven Premier League matches so far this season while also starting both of Arsenal’s champions League fixtures thus far.

It is understood that the North London club wasn’t to tie him down on a long-term deal as he continues his progression as a key first-team player.

Alex Oxlade-Chamberlain Ruled Out Of Arsenal’s Clash Against Schalke