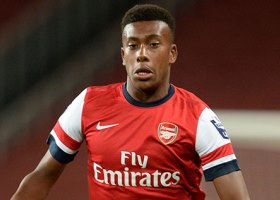 Reports are out claiming that Alex Iwobi has signed pro terms with Arsenal.

The 18-year-old England youth international has been a regular for Arsenal Under-18s this term and has also made six appearances in the U21 Premier League in 2013/14.

Quick and skilful, Iwobi was a stand-out performer in the Gunners’ FA Youth Cup campaign this season.

Gunners, City,Utd and Chelsea in for Sneijder