It has been reported that Alex Oxlade-Chamberlain was absolutely delighted after helping Arsenal to a 2-0 victory over Crystal Palace on Sunday. 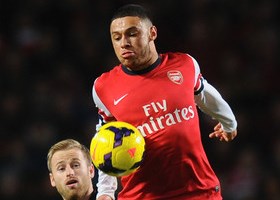 The England international star made just his second start of the season, and first since opening day, as he netted both goals in the win which saw the Gunners return to the top of the Premier League table.

After the match, ‘the Ox’ was in a buoyant mood after scoring in the 47th and 73rd minutes following four-and-a-half months out with a knee injury.

“It’s always an amazing feeling to score a goal and especially at a stadium like the Emirates and I’m glad I can help the team with two goals.”

He added: “It was really nice to get a start. Obviously it was my first start since my injury on the first day of the season it was nice to get out there and in the midfield – it’s nice that the boss has faith in me there.”