Reports are out claiming that Alex Oxlade-Chamberlain has made a point of scoring more goals for Arsenal following his winner in the Community Shield on Sunday. 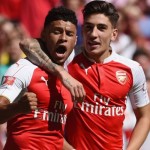 The 21-year-old attacking midfielder lashed home a stunning left-footed strike in the 24th minute to give the Gunners a 1-0 win over Chelsea in the annual pre-season match at Wembley.

After the triumph, in which Oxlade-Chamberlain was named Man of the Match, the England international made clear his plans to be a more frequent scorer while also highlighting the impact of summer signing Petr Cech who kept a clean sheet against his former club at headquarters.

“Today was a big game for us and we wanted to lay down a marker for our manager and our fans,” said ‘The Ox’.

“I want to contribute more goals this season, it’s a target I’ve set for myself, and of course I’m happy to have got the goal today.

“This squad’s been together for a good number of years now, and with the signing of Petr Cech we’ve been lifted.

“He’s such an amazing player and has already shown what a good signing he is.

“There is a really good feeling about this season but you never want to speak too soon. The real work starts next week.” The Agent Of Arsenal, Chelsea Target Andriy Yarmolenko In Contact With Everton